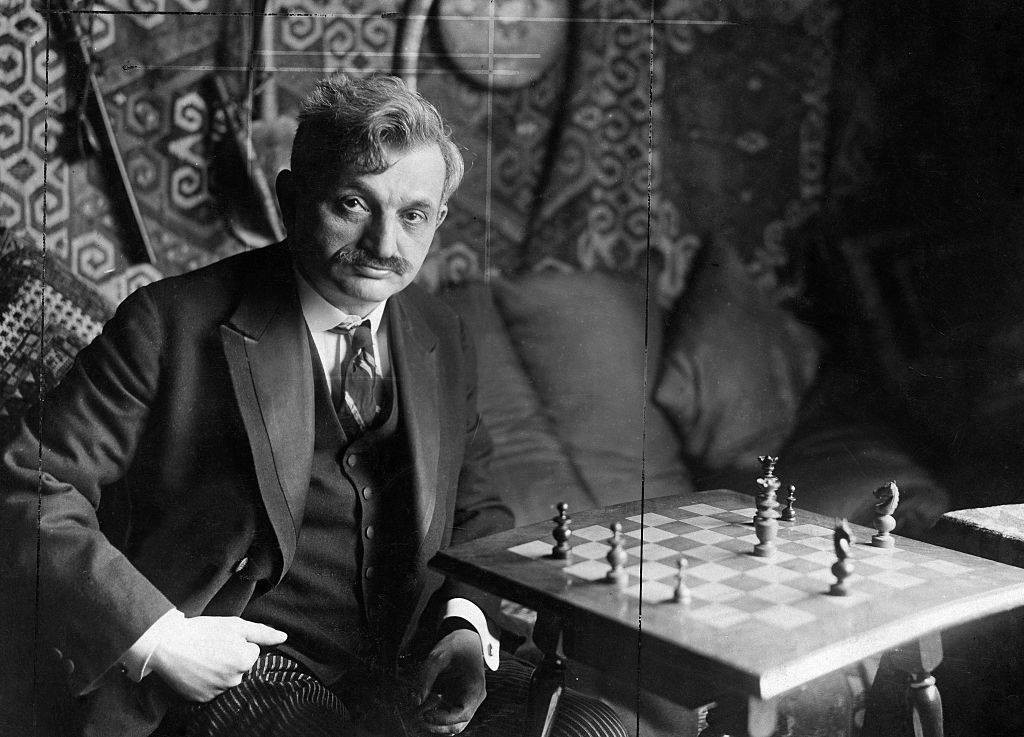 Chess masters have, over the past two centuries, devised various spectacular final ‘endgames’ for themselves. Some of the more eccentric and ingenious methods have included: defenestration (such as, Curt von Bardeleben 1861–1924 and Lembit Oll 1966–2019), leaping to their doom from bridges (Karen Gregorian 1947–1989), plunging one way into otherwise impenetrable mountain caverns (Georgy Agzamov 1954–1986), throwing himself in front of a train (Johannes Minckwitz 1843–1901) and, most bizarre of all, ruthless dieting. In 1874 the once portly Thomas Wilson Barnes, a man who had won no fewer than three games against the legendary Paul Morphy, died at the age of 49 after going on an extreme diet, which shed him 130 pounds (or just under 60 kilos) in weight over ten months. This method of weight loss, understandably, did not catch on.

In spite of this plethora of life ending bids, it would, however, seem that no prominent chess player has ever actually perished from mental degeneration or the effects of Alzheimer’s disease. I am assured of this encouraging fact by leading Spanish journalist, correspondent for El Pais in Madrid, International Chess Master and expert on Alzheimer’s, Leontxo Garcia Olasagasti.

Alzheimer’s disease is a modern scourge of the elderly. According to Alzheimer’s Disease International (the worldwide federation of Alzheimer’s associations), “There were an estimated 46.8 million people worldwide living with dementia in 2015.” In addition to the tragic human cost, mental degeneration has a financial cost of £26.3 billion per annum in the UK alone.

Given the absence of Alzheimer’s amongst chess champions, might it be claimed that chess can help to combat the onset of that specific type of disease? There is certainly a body of opinion prominently voiced by Manuel Lillo-Crespo, Mar Forner-Ruiz, Jorge Riquelme-Galindo, Daniel Ruiz-Fernández and Sofía García-Sanjuan in their 2019 paper, from The International Journal of Environmental Research and Public Health, 14 June 2019: “Chess Practice as a Protective Factor in Dementia.” Furthermore, there are striking examples of chess champions soldiering on with considerable success into great age. Thus Emanuel Lasker (World Champion 1894–1921) was still performing with distinction in his mid-sixties, inflicting a crushing defeat on future World Champion Max Euwe in 1934. Vassily Smyslov (born 1921 and World Champion 1957–1958) still succeeded in qualifying for the final of the World Title Candidates’ tournament against the youthful Kasparov in 1984. Interestingly, Smyslov’s assistant in that clash with Kasparov was Yuri Averbakh, now the world’s oldest Grandmaster. Finally, Viktor Korchnoi (born 1931 and twice World Title Challenger in 1978 and 1981) defeated the young lion, Fabiano Caruana in 2011, a player over sixty years Korchnoi’s junior and himself challenger to Magnus Carlsen’s throne in their match from London a mere seven years later.

It has to be understood that chess may be a sedentary hobby or pastime when played socially, but at the highest level of international competition, chess becomes a sport, indeed a strenuous one, and is recognised as such by the majority of nations in the world, though not the UK. An important component of modern sport is nutrition, and in the context of chess, brainpower and the prevention of mental degeneration, or, more positively, the prolongation of mental acuity, is of paramount importance. A vital further element of brainpower and, indeed of chess mastery, is the cultivation of memory. I would say that for chess, memory does not so much focus on recalling vast reams of telephone directory variations and sub variations, but recall of patterns, structures and trends.

As to the right fuel to nourish the brain, world beating nutritional expert Dr. Michael Crawford, Director of the Institute of Brain Chemistry and Human Nutrition, based at London’s Imperial College, has highlighted progress in nutrition knowledge made over the century, as well as some major gaps in implementation of that knowledge. Brain famine caused by shortage of nutrients that support perinatal brain development has unfortunately become a global reality, even as calorie-protein malnutrition was largely averted by development of high yield crops. Whereas protein-calorie malnutrition has not been fully eradicated, the neglect of global food policies that support brain development and maintenance are, in fact, far more alarming. Brain disorders now top the list of the burden of disease, both in terms of cost and numbers, since neurocognitive health, remarkably, is not officially listed among the non-communicable diseases (NCDs) and is therefore hardly considered as a component of food policy. Foods with balanced essential fatty acids and ample absorbable micronutrients are plentiful in marine and shore-based foods but deficient as soon as one moves only a few kilometres away from the sea. Sustained access to such foods must become a priority throughout the world to enable each child to develop their intellectual potential, and support a prosperous and peaceful world. Nutrition education and food policy should place the nutritional requirements for the Brain at the top of priorities.

I well recall that after a stirring speech on the value of marine based nutrition, Nigel Short repaired downstairs to the dining room of Simpson’s-in-the-Strand, devoured a Dover sole, and by adhering to healthy, brain-friendly piscatory dishes, scored one of his most impressive results in the last of the Staunton Memorial Tournaments, which I organised with Barry Martin, the world’s most prominent chess playing artist. When I scored my first Grandmaster result at Nice 1974, I lunched every day on pizza “frutti di Mare”, spread generously with mussels, prawns and other seafood delicacies.

In parallel to correct brain nutrition, cultivation of memory power is also important for success in chess and most Mind Sports. The World Memory Championships have been dedicated ‎for twenty-seven years to fighting mental degeneration, especially in ways which are accessible, inexpensive to implement and easy to operate. Exercising the brain extends its ability and longevity. The brain is like a muscle, if you do not exercise it then it atrophies. I believe that memory techniques are the answer.

Examples of memory techniques in chess range from Paul Morphy’s displays against eight Master-strength opponents in the late 1850’s, without sight of the boards, through to reigning World Champion, Magnus Carlsen’s ability to recognise any position thrown randomly at him from any World Championship match from the past century plus. The current absolute Guinness World Record for games of chess played simultaneously is held by then 28 year old Timur Gareyev, who contested 48 games at once in Las Vegas, December 2016, scoring 80 per cent, wearing an actual blindfold and taking 23 hours. All this time he spent cycling on an exercise bike on which he rode the equivalent of 50 miles.

The following personal experience from China demonstrates how teaching mnemonic techniques followed by regular practice led to the apparent reduction of the symptoms of Alzheimer’s disease. In 1991, my late friend Tony Buzan and I founded the World Memory Championships. Since then, competitive memory has grown into an international phenomenon, now involving over 40 countries worldwide establishing what aspires to become a major new Mind Sport on the global stage at a local, regional, national and international level.

The purposes for the World Memory Championships were and are: to promote Memory as a new Mind Sport, and in so doing to expand opportunities for “Mentathletes” in all countries. To redefine the art and the science of Memory by establishing new norms, benchmarks and records, and to provide certifications and rankings for these. To reintroduce Memory as a fundamental skill for all ages, thereby reinvigorating faith in and enjoyment of memory skills. To demonstrate that Memory is the basis of creativity. To recover and validate the mnemonic systems of earlier human cultures and to revive the traditions of oral memory. To create a global community of like-minded individuals fascinated by exploring the power and potential of Memory and the human mind. It is my ambition that memory, a crucial facet of chess, may ultimately come to complement chess as a vibrant international sport.

Here is an interesting testimony from an octogenarian Chinese lady doctor who demonstrated how studying the fundamentals of memory helped her to combat symptoms of Alzheimer’s, and I believe that such mechanisms are also present in chess.

“My name is Kuang Liqun, an 80-year-old retired doctor. I am delighted to report to you about the results of my participation in brain-training exercise. I trained myself with mnemonics, freed myself from the trouble of Alzheimer’s that had reached 1-2 stage, and restored my brain to youth.

“I used to exhibit three symptom behaviours of Alzheimer’s disease. Firstly, I was always confusing time, place and space. The second symptom was that my habits and customs had changed and I became introverted and moody. The third symptom was that I couldn’t remember things which happened recently but did remember what happened a long time ago. Importantly, I found a good teacher who trained me in mnemonics. By 2011, the teachers encouraged me to participate in the 20th National Chinese Memory Championships and even going on to the 20th World Memory Championships of the same year. The final vindication and rehabilitation: I have now won the Senior Category (for over 60’s) section of the 20th World Memory Championships.”

I increasingly believe that memory training and chess, combined with brain friendly nutrition, can combine to form a powerful aid in fighting Alzheimer’s. Maybe it is time for our medical authorities to prescribe a daily game of chess, eating some fish, or even seaweed, as in Japan, combined with regular training in mnemonics.

The three following games demonstrate the chess gerontocracy at work:

The first is Max Euwe vs Emanuel Lasker in Zurich 1934 where the veteran sacrificed his queen to paralyse White’s forces. The second as Vassily Smyslov and Zoltan Ribli fought in the World Qualifier of London 1983. White’s attack resembles more a tactical tsunami by the youthful Mikhail Tal than a game by the normally more stately 62-year-old Smyslov.  Finally, the third game which I mentioned earlier: Fabiano Caruana vs the nearly 80-year-old Viktor Korchnoi from Gibraltar 2011.

Raymond Keene’s latest book “containing some of his best pieces from TheArticle, is now available from Amazon, and Blackwell’s.

A Message from TheArticle

We are the only publication that’s committed to covering every angle. We have an important contribution to make, one that’s needed now more than ever, and we need your help to continue publishing throughout the pandemic. So please, make a donation.