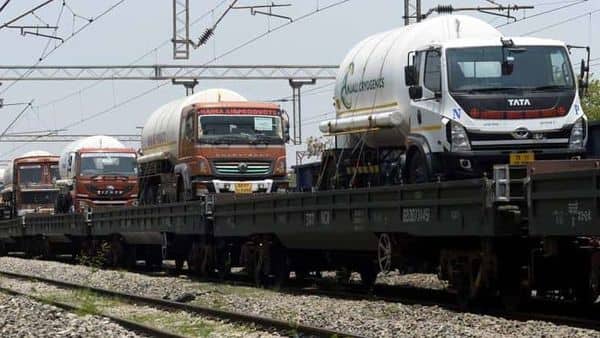 In exactly one month, the Indian Railways delivered more than 16,023 tonnes of medical oxygen amid a high demand for it due to the ongoing pandemic. The national transporter’s Oxygen Express trains started their deliveries on April 24 in Maharashtra with a load of 126 tonnes of oxygen.

Indian Railways said in an official statement, it is worth mentioning that Oxygen Expresses started their deliveries 30 days back on 24th April in Maharashtra with a load of 126 MT. Within one month time Indian Railways has delivered more than 16000 MT of LMO to 14 states across the country.

It may be noted that 247 Oxygen Expresses have completed their journey so far and brought relief to various States, it also said adding 12 loaded Oxygen Express trains are currently running with more than 920 tonnes of liquid medical oxygen (LMO) in 50 tankers.

In its statement it said, Highest ever single day load of more than 1142 MT of Oxygen relief delivered by Oxygen Expresses yesterday. Previous best was 1118 MT on 20th May 2021.

Amongst the Southern States, delivery of LMO to Tamil Nadu and Karnataka crossed 1000 MT each.

In order to ensure that oxygen relief reaches in the fastest time possible, the railways is also creating new standards and unprecedented benchmarks in the running of Oxygen Express Freight Trains. The average speed of these critical freight trains is above 55 kmph in most cases over long distances, the release stated.

(With inputs from agencies)