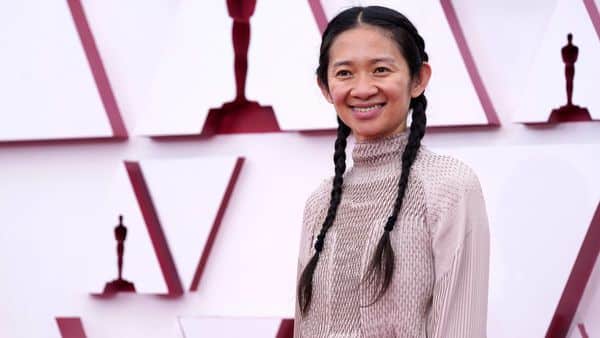 “Nomadland”, a recession-era tale about a grief-struck woman in the American West, won the Oscar for best picture on Sunday.

The film stars Frances McDormand as a widow in a depressed Nevada mining town who turns her van into a mobile home and sets out on the road, taking seasonal jobs and making friends along the way.

“Nomadland” was widely considered the front-runner heading into Hollywood’s biggest night, having dominated this year’s awards season. is based on a 2017 nonfiction book by Jessica Bruder and features real-life nomads in supporting roles as fictionalized versions of themselves.

China-born filmmaker Chloe Zhao, who told the story, became the first Asian woman and second woman ever to win best director at the Academy Awards.

It was the first Oscar for Zhao, 39, who featured real-life nomads alongside actress Frances McDormand to show the lives of older Americans who travel from job to job trying to scrape together a living.

Zhao was born in China and lived in Beijing until age 14, when she went to boarding school in London and later finished high school in Los Angeles.

But her big moment was not seen live on television in China, where she has come under criticism. Posters on Chinese social media said Zhou has insulted China in comments in the past.

Hong Kong TV audiences were also unable to watch in real time because free-to-air broadcaster TVB declined to air the Academy Awards for the first time in more than 50 years. TVB, which has broadcast the Oscars every year since 1969, said it would not carry the ceremony “commercial reasons.”

The decision not to air the Oscars has raised concerns about dwindling freedoms in Hong Kong, which has taken an authoritarian path since China imposed a sweeping national security law last year in response to the financial hub’s pro-democracy protests of 2019.

But her comments upon winning were apolitical and evoked fond memories of her childhood in China, recalling a game she played with her father trying to memorize classic Chinese poems.

She recalled one entitled, “Three Character Classic,” in which a character says “people at birth are inherently good,” Zhou said, an apparent reference to her casting non-actors in her films.

“I still truly believe them today,” Zhou said of the letters in the poem. “Even though sometimes they might seem like the opposite is true, but I have always found goodness in the people I met everywhere I went in the world.”

Casting real people adds a realism to her films, which tell real and somewhat simple stories with an understated feel.

In Minari, Youn played the role of Soon-ja, “grandma” to young David, who comes from Korea to stay with the family on their farm in Arkansas. She brings with her the “minari” seeds that give the film its title.

The actor defeated a strong set of contenders including Glenn Close for ‘Hillbilly Elegy’, Olivia Colman for ‘The Father’ and Amanda Seyfried for ‘Mank’. She has previously bagged the Screen Actors Guild and Bafta best-supporting actress awards.

Oscar 2021 Predictions: Who Will Win – Forbes

Mothers Day 2021: Movies That Celebrate the Spirit of Motherhood – News18