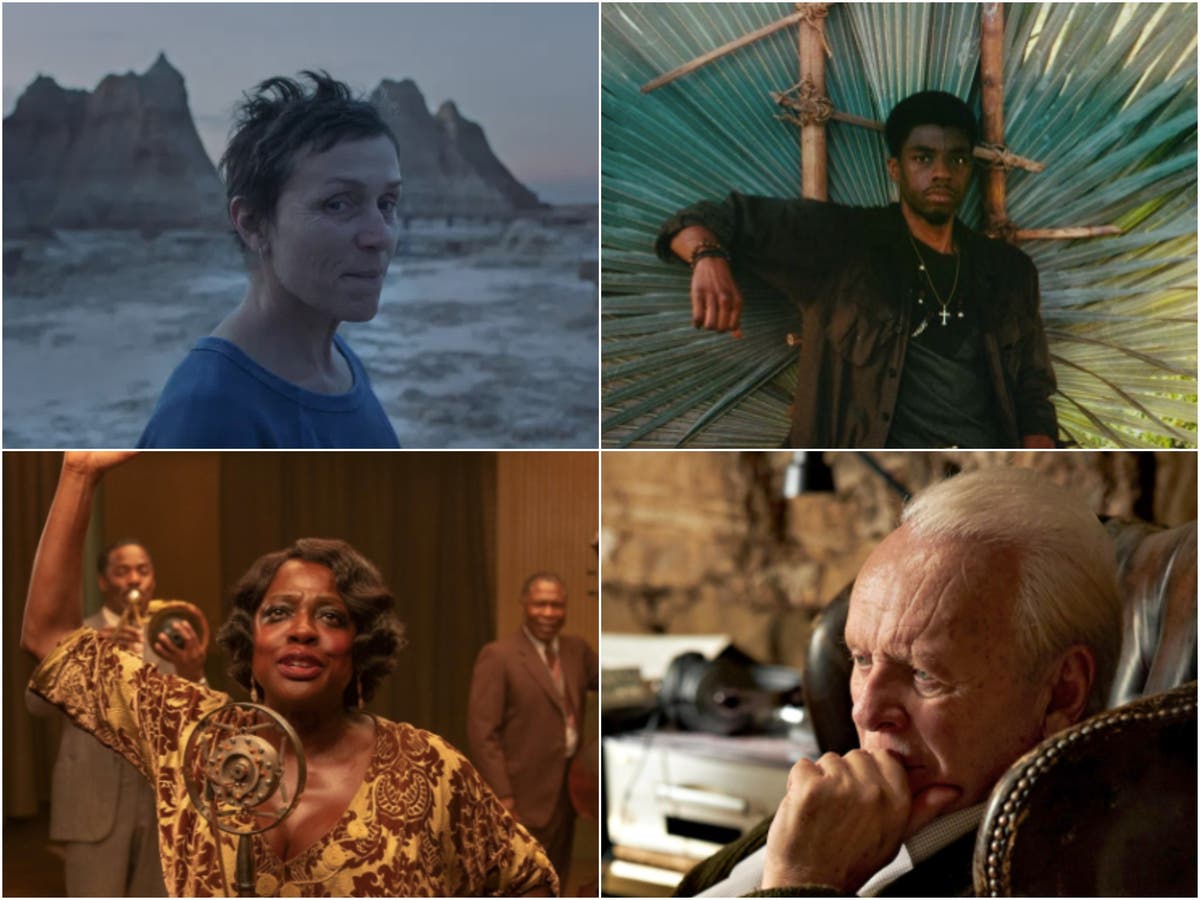 wards season, like everything else these days, will unfold in a few unprecedented ways. The Oscars have had no choice but to adapt to film’s rapidly changing landscape – cinemas across the world remained shuttered for most of last year, in response to the Covid-19 pandemic. Blockbusters became an endangered species. All eyes instead turned to the world of streaming, where Netflix, Disney, and Warner Bros (with their new HBO Max service) locked horns in a battle for domination. And now, for the first time in history, films that have been released without a qualifying run in cinemas will be eligible for the Academy Awards. The ceremony itself has also been pushed back by a month, giving studios an expanded window of time to prep and release potential contenders – it’s now scheduled for 25 April 2021.

Netflix stands to benefit the most from these strange times. Four of its titles have a conceivable shot at Best Picture: Ma Rainey’s Black Bottom, Mank, Da 5 Bloods, and The Trial of the Chicago 7. This could mark the streaming giant’s very first Best Picture win. But the traditional studios, those typically favoured by the Oscars, aren’t without their own powerhouses – Searchlight Pictures’s Nomadland is an early favourite here.

The various year-end critics circle awards, including those by the New York Film Critics Circle and the Los Angeles Film Critics Association, have already established a fairly reliable picture of what this year’s race looks like. And yet, there’s a few as-yet-unreleased films that could swoop in and steal focus – namely, Warner Bros’s Judas and the Black Messiah, directed by Shaka King, which draws from the life of Fred Hampton, chair of the Illinois chapter of the Black Panther Party in the late Sixties. Much of the pre-release buzz is centered on its two stars, Lakeith Stanfield and Daniel Kaluuya – the former in the role of FBI informant William O’Neal; the latter playing Hampton himself.

With so many of the usual rules upended – including a return to a fixed list of 10 nominees for Best Picture, instead of a sliding scale of between five and 10 – this year’s awards race has become wildly unpredictable. Anything could happen when the nominations are announced on 15 March 2021, but here’s our best guess as to what to expect on the day.

One Night in Miami…

The Trial of the Chicago 7

Judas and the Black Messiah

While there’s still so much at play (another unreleased film worth mentioning here is The United States Vs Billie Holiday, directed by Lee Daniels), the dominant narrative around this year’s Oscars has seen two films vying for the top spot. One represents the academy of old, the other the academy of the future – one that’s become far more diverse thanks to an ever-expanding list of members and that, for the first time last year, awarded Best Picture to a film not in the English language, Bong Joon-ho’s Parasite.

The academy of old is represented by David Fincher’s Mank, which explores the Golden Age of Hollywood through the eyes of screenwriter Herman J Mankiewicz, as he struggles to finish Citizen Kane. It’s a handsome film, exquisitely put together – and the academy has a predictable soft spot for any film that turns the lens on its own industry, even if Fincher’s take is more cynical than self-congratulatory.

Nomadland, meanwhile, is a sober, unembellished piece of filmmaking about America’s transient workforce. It has none of the flashiness associated with traditional Oscar bait, priding itself on its semi-documentary credentials: while Frances McDormand takes the lead role, director Chloé Zhao surrounds her with real-life nomads and first-time actors. The film was a hit at this year’s festivals, winning the Golden Lion at Venice and the People’s Choice Award in Toronto. So, it could realistically follow the same trajectory as Parasite, whose Palme d’Or win at the Cannes Film Festival helped propel it all the way to Best Picture.

Only three animated films have ever been nominated for Best Picture: Beauty and the Beast (1991), Up (2009) and Toy Story 3 (2010). Could Pixar’s Soul, a joyous celebration of life’s purpose, join that hallowed list?

Aaron Sorkin, The Trial of the Chicago 7

Regina King, One Night in Miami…

Whoever makes it into this category will instantly define this year’s major awards contenders, so expect another battle between Nomadland and Mank. David Fincher is a long-beloved filmmaker who’s already been nominated twice for Best Director (though he’s never won). Mank, written by his late father, is a dream project. That’s a hard narrative to resist. Zhao, meanwhile, is set to become the first woman of colour nominated for Best Director. If she’s joined by Regina King, who shot a magnificent adaptation of Kemp Powers’s play One Night in Miami…, then this would mark the first time the category featured two women, let alone two women of colour. It would be a historic – and wildly overdue – moment in Oscars history.

The A24 film, set in America’s Pacific Northwest during the 1820s, hasn’t picked up as much steam as its distributor might have hoped. But there’s one factor that still needs to be considered: its Best Film win at the New York Film Critics Circle Awards, which has proven one of the most reliable indicators of future Oscar contenders.

Vanessa Kirby, Pieces of a Woman

Sophia Loren, The Life Ahead

A film that’s come into focus in the Best Actress category is Emerald Fennell’s Promising Young Woman, a daring thriller that pits Carey Mulligan’s Cassie against a world of abusive men. But the competition is tough: Frances McDormand and Viola Davis have the clout of their previous Oscar wins, the former going quiet and introspective for Nomadland, the latter brazen and formidable as the title character in Ma Rainey’s Black Bottom. Vanessa Kirby could also get a look-in, thanks to her provocative turn as a woman dealing (or, more accurately, not dealing) with the loss of a child in Pieces of a Woman. She won Best Actress at the Venice Film Festival but, while critics have been enamoured with the film’s opener – an intense, 30-minute unbroken shot depicting a traumatic childbirth – they haven’t been quite as enamoured by the rest of the film.

Although the film is yet to released, there’s still a fair of amount of buzz around Andra Day’s performance as the legendary American jazz singer who was hounded by the FBI – it was decided she’d be made an example of to further the country’s ill-fated “War on Drugs”. Since biopics always do well in the acting categories, Day remains one to look out for.

Chadwick Boseman was always going to be a frontrunner in this category – his performance in the big-screen adaptation of August Wilson’s play, which follows a set of Black musicians in Twenties Chicago, crackles like embers in a fire. The academy will always be conscious, in the back of its mind, that this marks its last opportunity to honour Boseman’s formidable career, following his death late last August. But there’s a second, equally strong competitor here: Anthony Hopkins, who could follow up his win in 1992 for Silence of the Lambs with his turn in The Father, a film that tackles the sense of premature grief and hopelessness that surrounds dementia. Delroy Lindo’s performance in Da 5 Bloods also demands attention – it’s a true feat to master all the nuances of playing a rage-choked, PTSD-inflicted, Trump-worshipping Vietnam vet.

The actor’s chances might be hurt by the fact Sound of Metal is unlikely to pick up many nominations elsewhere, but as a heavy metal drummer dealing with hearing loss, Ahmed turns in an exceptional, heartbreaking performance.

Ellen Burstyn, Pieces of a Woman

Olivia Colman and Amanda Seyfried are the safest picks in this category. One is the steady, reliable second hand to Anthony Hopkin’s performance in The Father, in the role of the daughter he obstinately pushes away. The other is the glimmering highlight of a large, ensemble film, playing the breezy, but deceptively wry Marion Davies, mistress of William Randolph Hearst. Glenn Close, as a hard-bitten Appalachian grandmother in Hillbilly Elegy, was an early contender, but the film’s lukewarm reception has seen her sidelined over the past few months. But, she’s Close after all – they’ll probably chuck her a nomination.

The academy tends to ignore purely comedic performances, with Robert Downey Jr in Tropic Thunder and Melissa McCarthy in Bridesmaids being the only exceptions to the rule in this century. But Maria Bakalova’s role in Borat: Subsequent Moviefilm – as the daughter of the fiendish, moustachioed Kazakh television journalist – is an exercise in pure grit and determination, especially when it comes to a certain newsworthy, climactic encounter with Rudy Giuliani. Surely that kind of effort can’t go unrewarded.

Sacha Baron Cohen, The Trial of the Chicago 7

Mark Rylance, The Trial of the Chicago 7

There’s an unusual amount of ensemble films in this year’s crop of contenders, resulting in a mildly chaotic approach to dividing up the lead and supporting categories – one entirely dependent on how studios choose to submit their potential nominees. There’s a lot of strategising here. For example, Netflix has chosen to submit the entire cast of The Trial of the Chicago 7 for Best Supporting Actor (which is a little ridiculous, if you think about it), meaning it’s likely more than one of its stars will show up in this category. Question is: which ones? There are also multiple cast members from Ma Rainey’s Black Bottom and One Night in Miami… in contention. And then there’s the matter of whether Chadwick Boseman will receive two posthumous nominations, the other here being his small (but impactful) role in Da 5 Bloods.

Although it’s possible Lakeith Stanfield could also crop up in the Best Actor category, the bigger focus seems to be on how Kaluuya will handle Hampton, since the story of his assassination is such a crucial part of civil rights history. He could very well crop up last minute in this category.