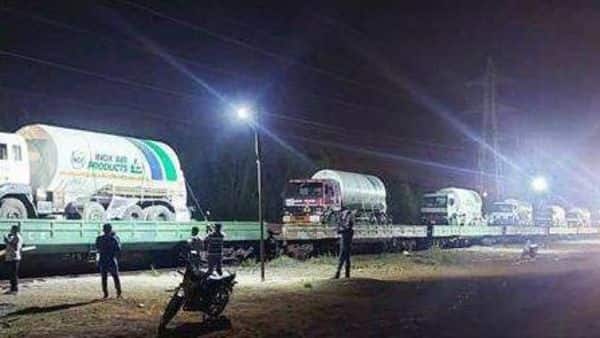 Given the shortage of medical oxygen in the country that led to patients dying in the hospitals amid the second wave of the coronavirus pandemic, Indian Railways started leveraging its extensive network to supply liquid medical oxygen faster than the time taken through road transportation. Accordingly, corridors have been created for fast movement of these Oxygen Express trains.

According to a statement from the railways ministry on Sunday, this oxygen has been transported through 1,274 tankers to 15 states.

“The average speed of these critical freight trains is way above 55 (km/hour) in most cases over long distances. Running on high priority Green Corridor, with the highest sense of urgency, operational teams of various zones are working round the clock in the most challenging circumstances to ensure that oxygen reaches in (the) fastest possible time frame. Technical stoppages have been reduced to 1 minute for crew changes over different sections,” the statement said.

While it’s the states which proved the tankers to the Indian Railways for bringing oxygen, the national carrier has been picking it up from places such as Hapa, Baroda and Mundra in western India and Rourkela, Durgapur, Tatanagar, Angul in eastern India for supplies across the country.

With India facing a very severe second wave of covid-19 infections, its creaking healthcare system was caught flat-footed again, with reports of acute shortages of oxygen across states. The situation has improved since then in the backdrop of imports and other efforts on the domestic front.

“Till the time of this release, 5 loaded Oxygen Expresses (are) on run with more than 406 MT of LMO in 23 tankers,” the statement added.

While Haryana and Karnataka have received supplies of 2,000 MT each, Tamil Nadu and Telangana have got 1,800 MT of liquid medical oxygen supplies each.

“It is worth mentioning that Oxygen Expresses started their deliveries 36 days back on 24 April in Maharashtra with a load of 126 MT,” the statement said and added, “Oxygen relief by Oxygen Expresses reached out to 15 states namely Uttarakhand, Karnataka, Maharashtra, Madhya Pradesh, Andhra Pradesh, Rajasthan, Tamil Nadu, Haryana, Telangana, Punjab, Kerala, Delhi, Uttar Pradesh, Jharkhand and Assam.”

India’s domestic liquid medical oxygen production has been ramped up to around 9,500 MT per day. State-run firms are also setting up pressure swing adsorption (PSA) medical oxygen generation plants to help meet the shortage in the country.

The financial condition of PMC Bank continues to be precarious: RBI – BusinessLine