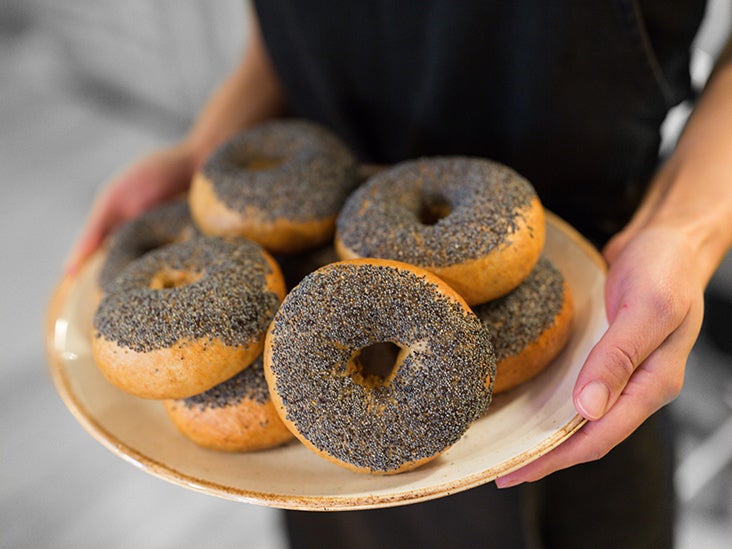 Poppy seeds are good sources of protein and dietary fiber, as well as some essential vitamins and minerals, including calcium and magnesium.

Poppy seeds are small, black, and kidney shaped. They have been part of traditional Mediterranean and Middle Eastern diets for thousands of years.

In more recent years, they have become more popular in the United States. People have been using them in recipes such as bagels and muffins as well as eating them raw.

The seeds come from the poppy plant. Manufacturers use the sap of the poppy plant to make opioid drugs such as heroin, morphine, and oxycodone. This means that poppy seeds can sometimes contain small amounts of opiate compounds.

Keep reading to learn more about the health benefits and nutritional information associated with poppy seeds. This article also covers the potential risks associated with consuming too many.

According to the , 100 grams (g) of raw, whole poppy seeds contain:

A portion of poppy seeds, which is about 28 g or three tablespoons (tbsp), contains:

Poppy seeds are rich sources of a number of nutrients, such as:

Three tbsp of poppy seeds contain about 6 g of protein. The Food and Drug Administration (FDA) says that people should try to get 50 g of protein per day, based on a 2,000 calorie diet.

The body uses protein to build and repair its cells and body tissues. Protein is also important for several bodily processes, including:

Fiber is important for the following reasons:

Poppy seeds are high in calcium, which is a mineral that the body needs to maintain strong bones and teeth. A 3-tbsp serving of poppy seeds contains 35% of an adult’s DV of calcium.

The body also needs magnesium to stay healthy. A 3-tbsp serving of poppy seeds contains 35% of an adult’s DV of magnesium.

This nutrient plays an important role in many of the body’s processes, including:

Zinc helps the immune system protect the body against bacteria and viruses. It helps wounds heal and is important for the maintenance of the senses of taste and smell. The body also needs it to make protein and DNA.

During pregnancy and childhood, the nutrient is essential in making sure that young bodies grow and develop properly.

A report from the European Food Safety Authority in 2011 said that poppy plant sap, which manufacturers use to make opioids, can sometimes contaminate the seeds.

However, it is also true that food processing, such as cleaning and cooking, can reduce these compounds by around 90%.

To be completely safe, experts recommend that people limit the number of raw poppy seeds they eat to about 1 tbsp per 7 pounds (lb) of body weight. This means that someone who weighs 150 lb, or 70 kilograms, should not eat any more than 7 tbsp of raw poppy seeds at a time.

There are currently no FDA recommendations regarding the upper limit for poppy seed consumption. However, there are few reports of adverse reactions arising from the traditional consumption of poppy seeds in foods.

It is also worth noting that eating poppy seeds can sometimes lead to failed drug tests. Learn more here.

Poppy seeds are great sources of many of the nutrients the body needs to stay healthy. These include protein, fiber, calcium, magnesium, and zinc.

The seeds do come from the same plant that manufacturers use to make opioids such as heroin. Sometimes, they may be contaminated. However, washing and cooking the seeds will remove most of the opioid compounds.

People should try to limit the number of raw poppy seeds they eat in order to avoid any of the possible side effects, even though these are rare and not usually serious.